Trump era in Atlantic City to end with a blast Wednesday with implosion of Trump Plaza
Can Atlantic City recover? It may take more than blowing up the Trump hotel
Snow warning: 'Incredible' -15C ice bomb blasts US – Now Atlantic freeze heads towards UK 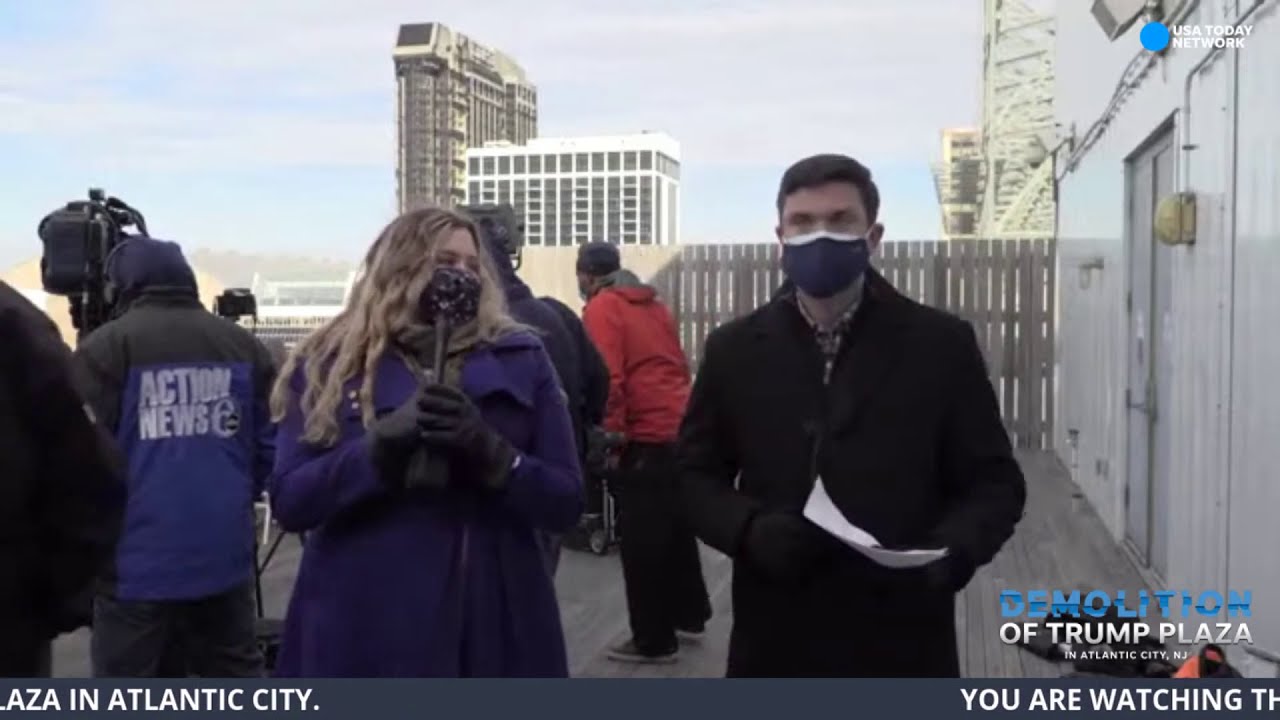 ATLANTIC CITY, N.J. — The former Trump Plaza Hotel and Casino tower came down around 9 a.m. EST Wednesday morning as scheduled, ridding the city of a derelict Boardwalk complex that was once part of former President Donald Trump’s casino empire.

Crowds gathered on the Boardwalk outside an exclusion zone, along nearby city streets or from their cars parked at Bader Field at the end of the Atlantic City Expressway.

The implosion of the gutted, 34-story tower, for many, symbolizes the end of Trump’s time in this gambling resort town that saw it grow to four casino hotels and eventually fall to numerous financial setbacks, four bankruptcies and property sales.

More:What taking Trump out of Atlantic City will mean for the Boardwalk resort

Atlantic City Mayor Marty Small has said Trump contributed to the early days of the city’s casino industry, creating jobs while making a lot of money.

“But he was selfish, took advantage of some people, hurt some people….. and stiffed some,” he added.

Sitting in “front row” seats in a nearby pier over the beach and Atlantic Ocean to view the tower’s destruction with city officials were 10 sets of winners of a city-sponsored charity auction benefiting the Boys and Girls Club of Atlantic City.

City Fire Chief Scott Evans said he hoped winds would cooperate and carry the resulting dust cloud east from the implosion site toward the ocean. Forecasts called for light winds around 10 mph from the northwest, according to the National Weather Service.

Evans also said the plan calls for the tower to fall on site and slightly to the north. He has explained that the triangular-shaped boardwalk entrance, a lower tower behind it and another lower building on the property will not be imploded.

Those structures will stand for now to help contain implosion debris and prevent it from falling onto streets and Boardwalk. Other parts of the complex already have been demolished by wrecking balls and other equipment.

Stephanie Koch, CEO of the nonprofit boys and girls club said donations connected with the event now total $191,000 — $175,000 from Carl Icahn after he shut down an earlier charity auction plan to award someone the right to push the detonation button.

The Trump Plaza, the only casino Trump built from the ground up, operated for 30 years before closing in 2014. Icahn Enterprises, a major real estate developer, bought both the Trump Taj Mahal, which closed in 2016, Trump Plaza and the Trump Entertainment Resorts company.

Icahn never reopened nor sold Trump Plaza; the Taj was sold in 2018 and now carries the Hard Rock name.

Trump World’s Fair Casino, formerly Playboy and then Atlantis, closed in 1999 and was torn down the following year after only a few years of operation on the Boardwalk.

Trump Marina, located off the Boardwalk and first called Trump Castle, is now the Golden Nugget.

At the height of casino-resort development here, the city had more than a dozen casinos. It now has nine and the mayor and other officials are eyeing family and non-gaming attractions to grow the city’s appeal.

Icahn Enterprises has not announced a redevelopment or sale plan for the Plaza property between Columbia and Mississippi avenues, but Small said the city expect to meet with Icahn representatives in the future.

“This is going to be exciting. We have been waiting for this to come down for years. It’s a real eyesore,” said Elizabeth McGlinn, owner and operator of the glass-enclosed One Atlantic events venue at the far end of the former Caesar’s pier.

Her venue will host the implosion viewing event, co-sponsored by the city and the Atlantic and Cape May Counties Central Labor Council.

Haines & Kibblehouse demolition contractors of Philadelphia and Bellmawr has offered no public comment on the implosion, citing contract prohibitions, nor has the new Palm Beach, Florida, office of former president Trump responded to comment requests.

“The Trump Organization enjoyed tremendous success in Atlantic City,” the organization’s online history brags, “and Donald Trump has been commended for the timing of his exit from this business.”

City licensing and inspections director Dale Finch has said Kibblehouse has been “cooperative and compliant” in the long-awaited demolition project, which he expects to go off smoothly.

Carol Comegno loves telling stories about South Jersey history and our military veterans. Her book, “The Battleship USS New Jersey: From Birth to Berth” is the definitive history of the battleship. If you have a story to share, call her at 856-486-2473 or email  [email protected]

Modern Masculinity: new dads in lockdown: 'I had a real feeling of inadequacy' – video

'What have you been drinking?' Merkel's meeting with German leaders descends into chaos

Democrats want to send $350B to cities and states with Biden's COVID stimulus bill, but Republicans see it as wasteful

Modern Masculinity: new dads in lockdown: 'I had a real feeling of inadequacy' – video 0

'What have you been drinking?' Merkel's meeting with German leaders descends into chaos 0

Democrats want to send $350B to cities and states with Biden's COVID stimulus bill, but Republicans see it as wasteful 0

Three vaccines. Increased manufacturing. How US will have enough COVID-19 vaccine for every US adult in May – or even sooner. 0

Business as usual! Queen dives into work with key meeting as Prince Philip in hospital 0

USA TODAY's Christine Brennen on the 'incredible highs, lows' of Tiger Woods, what to keep in mind 0